The Quinault Rainforest lies in Olympic National Park which is also a UNESCO World Heritage Site. It is on the Southwest end of the Olympic Peninsula, where the mountains meet the ocean. It is part of the temperate rainforest that stretches from Northern California through Canada to Southern Alaska. Receiving about 130 inches of rain and 10-15 inches of snow a year means, it’s pretty wet. The lake is beautiful as are the small nature trails on the southern shore of the lake. There are some real special areas were well worth exploring. Within a 50 mile radius of Quinault is the world’s largest Douglas Fir, Western Hemlock, Alaskan Yellow Cedar, Sitka Spruce, and Mountain Hemlock.

The trail to the valley beings after driving several miles up a dirt road to the trailhead. The trail is popular, so a midweek start allowed for best parking. In California, June is summer time conditions. However, here it was spring weather. This meant rain, snow, full rivers. In fact after the hike a group of use were trapped by a new landslide and had to wait for equipment to clear a path for us to exit.

The trail was muddy and fortunately the trail crew had cleared most of the down trees and the avalanche damage. Some of the most stunning features of this trail were the green lush surroundings. Western Hemlock, Douglas Fir, Sitka Spruce, Vine Maple all lined the trail.

I could not help but be smitten by shades of green everywhere!

Perhaps the standout trees were the Big Leaf Maples. Once upon a time ranchers would take livestock up to valley. After acquired by the Forrest Service they built a lodge. Currently the lodge is unstable, but it looks amazing in the valley. Either side of the valley is lined by snow-melt fed waterfalls. The valley itself is full of Giant Leaf Maples and wildlife.

It’s a short trail near the north shore ranger station. However, the greens combine with the serenity and untouched growth makes creates some amazing insight into this rainforest.

A captivating aspect of wildlife 20 miles into the forest is that they regarded me as just another animal in the forest.  They didn’t run and take off or posture.  They knew what I was, but simple did not care that much.  I gave them space, and they gave me mine.  The trees were full of bird and the forest floor was littered with grouse.  I spotted both sooty and ruffled grouse in camp, along with four types of woodpeckers, three types of sparrows.  Down by the river I saw dippers, sandpipers, two types of hummingbirds, and three types of warblers.  There is quite a bit of old growth forest in the area.  In the early mornings and in the evenings Marbled Murrelets go to and from their nests in the upper canopy.  This are sea birds than only nest in old growth forest (One more reason that old growth forests must be preserved). 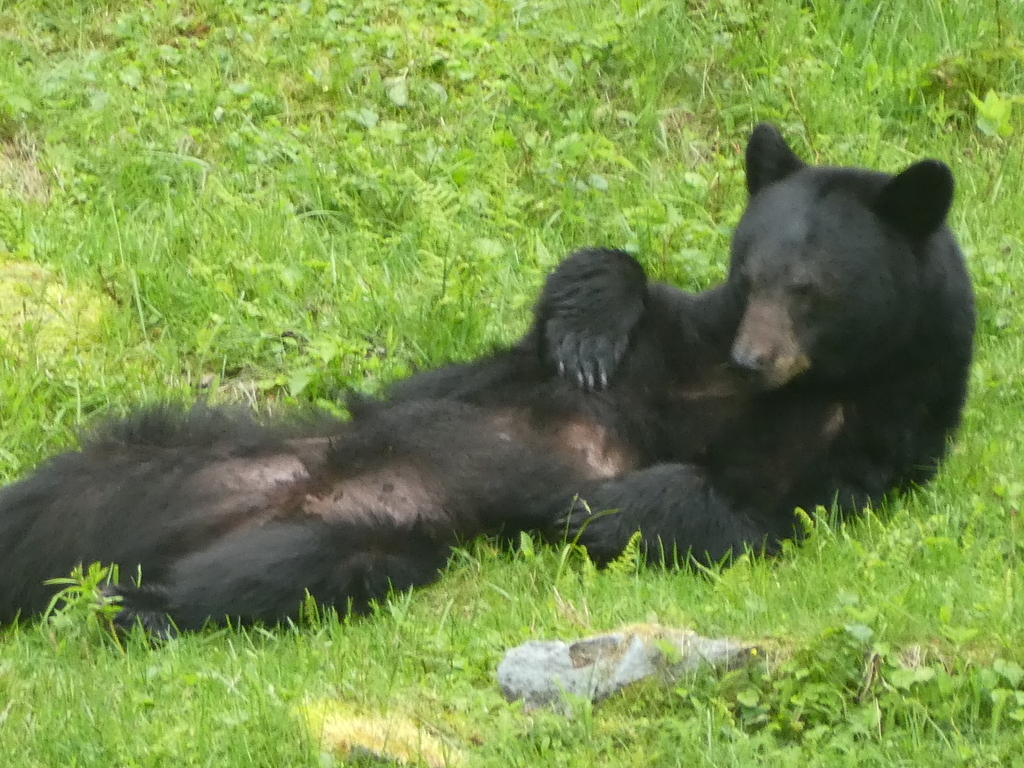 A mother black bear and her adolescent cub after grazing in the meadow came through camp.  They paused by my tent forging for a while. I watched them cross the river and play in a different meadow.  The mother used a tree a scratching post for her back.  Here, her cub lays on his back and scratches his chest.