The Deserts of California

I used to visit my father when he lived in Palm Desert. One time he took me to the Salton Sea. It was a sour memory. The town was a ghost town, there were hundreds of dead fish on the beach, and it smelled. What really bothered me, was what it signified: waste, excess, opulence, and the use of something without any consideration for the future. Flash forward 30 years. I visited the area again. This time, I drove around the entire sea. There were small communities hanging on to life. The resort towns that boomed in the 50s were mostly vacant. Small agriculture tracks dotted parts of the landscape. A stand out was the Sonny Bono National Wildlife Refuge. In partnership with the agriculture communities they worked to reestablish environments for migrating wildlife. I visited the Marsh Unit, the formal refuge, and the Imperial Wildlife Refuge – Wister Unit. Together they manage over 10,000 acres of marsh land. Why? The Salton sea is at a nexus of the Pacific Flyway (Birds migrating along the pacific cost), and the Central Flyway (Birds Migrating from Mexico through the central USA). Over 400 bird species have been documented in this area, and it provides a lifeline habitat for birds with long migrations and for locals species. 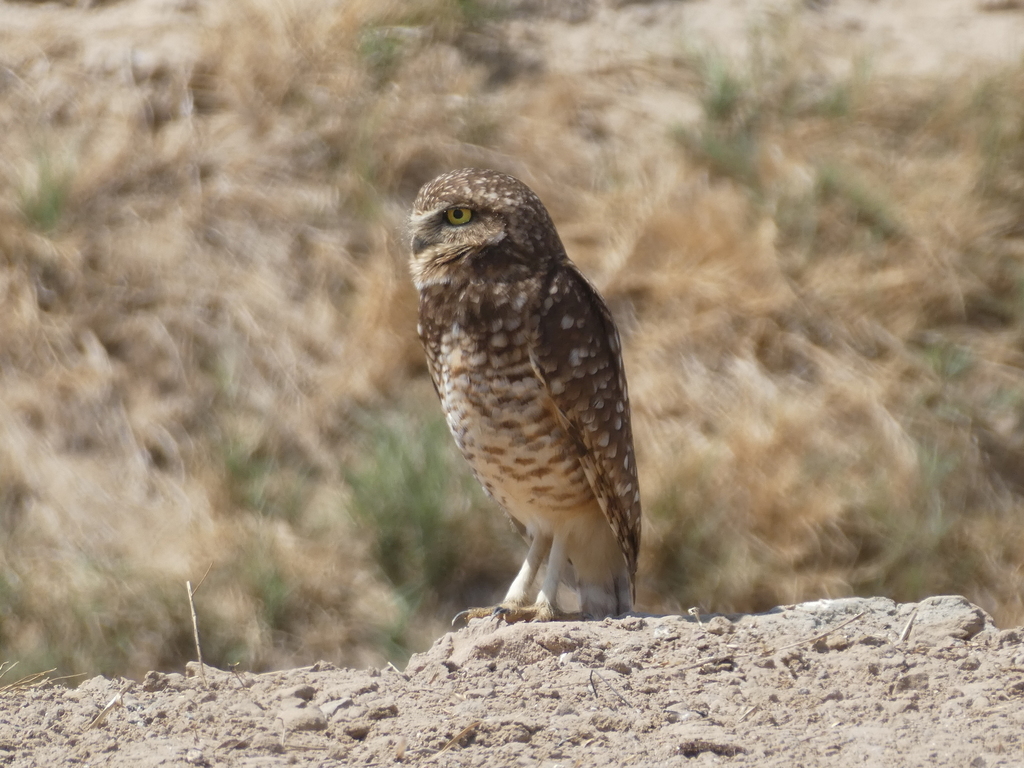 With numbers falling, the burrowing owl find the south shores of the Salton Sea ideal habitat. Less than 1000 pairs are left in Canada. 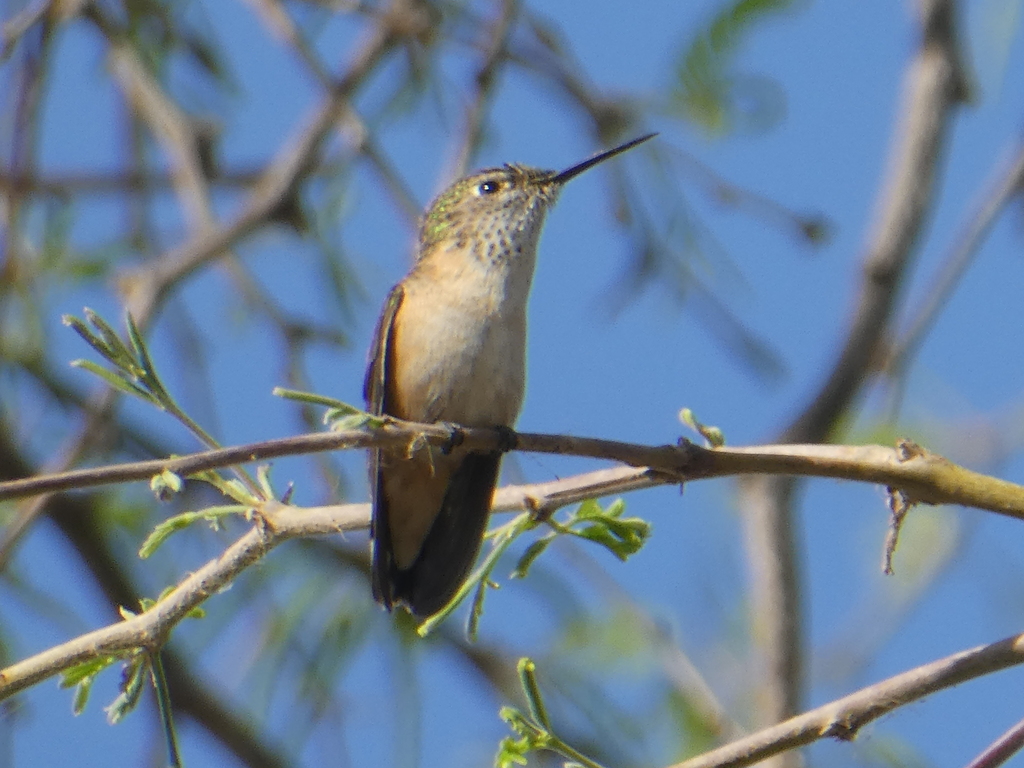 While, great strides are being made, overall the ground is being lost. The Sea is shrinking. It remains as a vestige of the Colorado river runoff. Just walking around you can see how much the sea has shrunk since the resorts and yacht clubs once dotted the shoreline. Now they are hundreds of yards away from the water. The government, local agencies, and environmental groups are doing everything they can to preserve the ecosystem, but with the Jet Stream moving farther north, there will be less rain and less snow pack to refill the lake….and overall less water to go around.

It is nearly 350 miles from the Salton Sea through Death Valley. Joshua Tree is the conjoining of the Sonoran and the Colorado Deserts. There are vast tracks of land with sage, sand, and stone on either side of the roadways. From time to time there are fences where homesteaders tried to make ranch life work. There are a great many dirt roads leading off in to dirt hills. Some for recreation, some for mines, and some lead to abandoned houses or trailers – dreams lost. From time to time there are small communities or plots of people making a go of it, where there is very little. It’s hard to emphasize this enough, but the vast nothingness stretches far and wide.

Water is life on this planet. I found several small oases in this vast desert that were truly amazing and frankly out of place.

Camping at Cottonwood springs was amazing. Hoof tracks from desert big horn, desert tortoise, rabbits, and squirrel, along dense brush encircled the campsite. The real treat was a 8 mile hike through the desert to the oasis. I expected a lot less in between than I found. I spotted nearly a dozen bird species, multiple reptiles, and a large diversity of flora and fauna. The oasis itself was a stand of palm trees. There was water in the upper oasis, but it involved more rock climbing than I was willing to do to get there.

Nestled along the way was wash after wash, and in and along many of them were desert flowers. 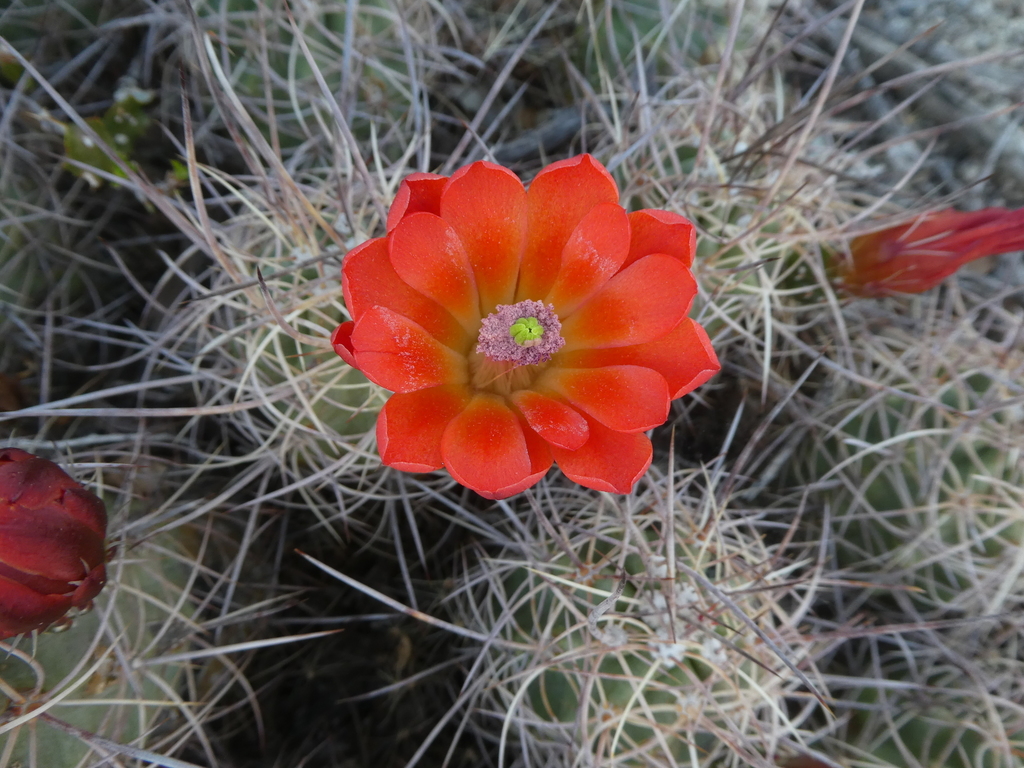 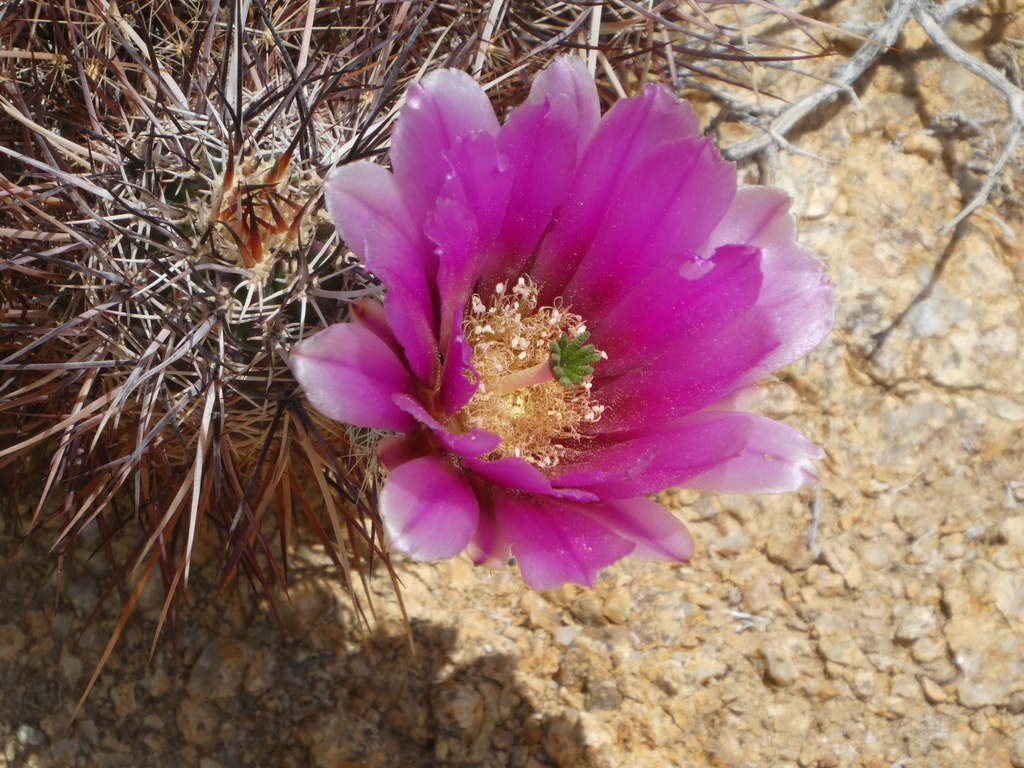 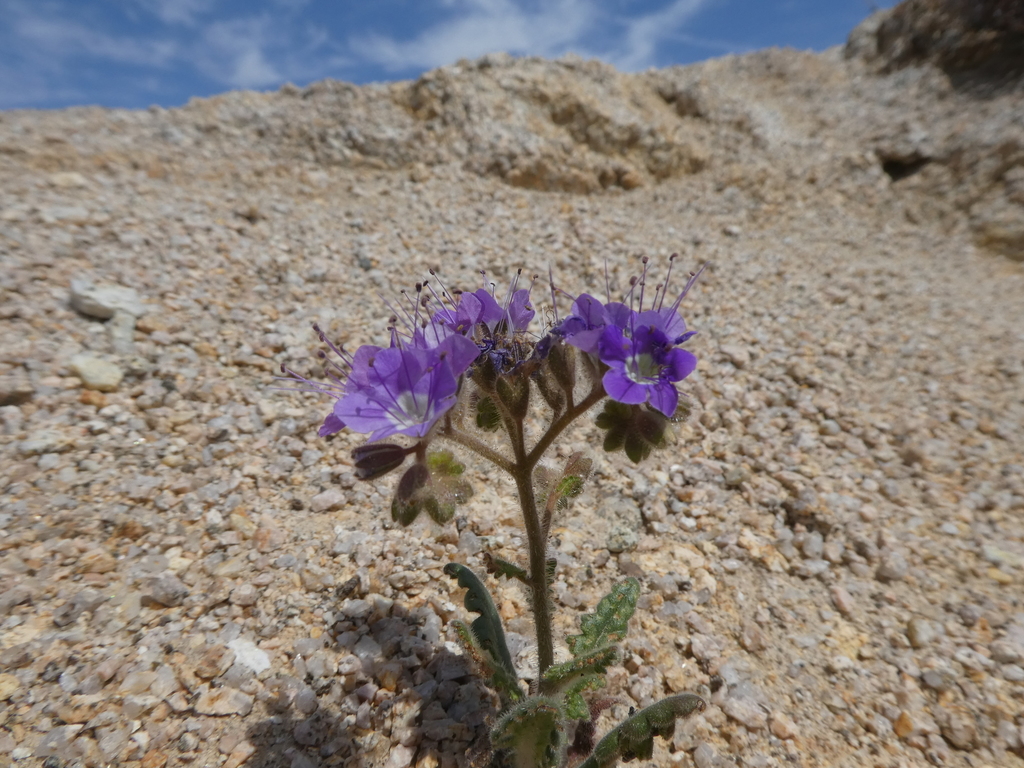 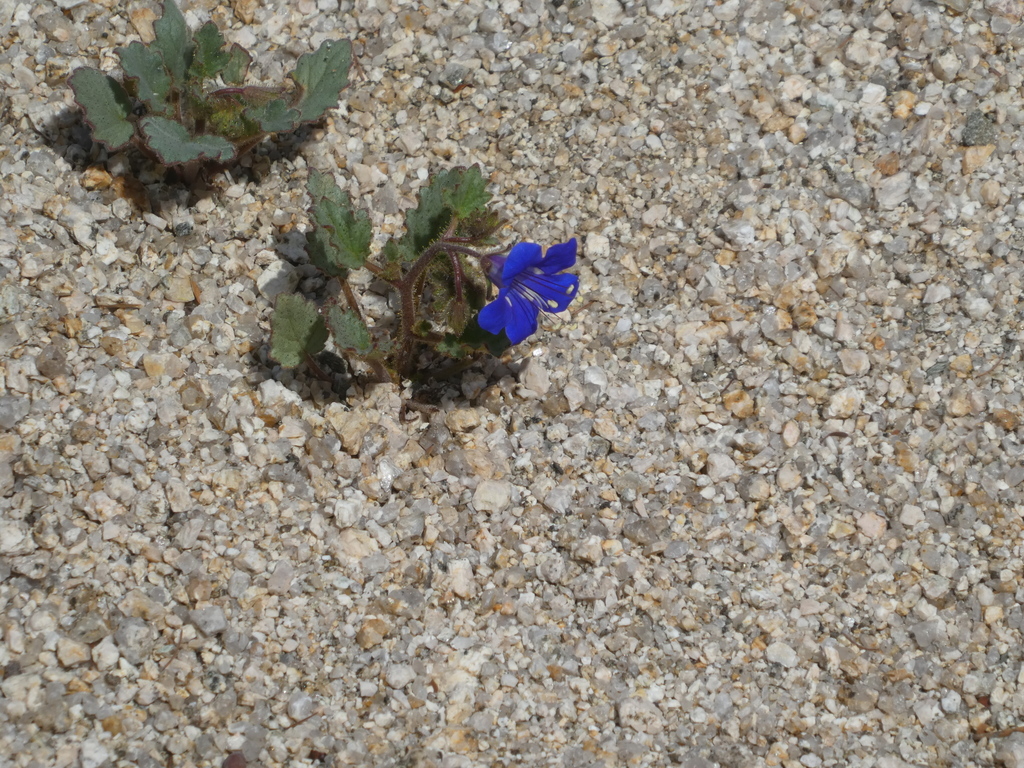 Just after Barstow, the Afton canyon exit quickly turns into a dirt road. There is a lot dirt roads for off road enthusiasts that lead into a valley over hills and beyond. However the main roads descends into something that just should be there – a valley rich with vegetation and wildlife. The Mojave is a punishing place. Temperatures soar. Vegetation is scare. Sand and Rock are plentiful. However, A river runs through the Mojave. While mostly underground, for a brief few miles, the river surfaces. Even though it is brown with iron, a valley full of life surrounds it. From early in the morning to late at night I heard bird calls and coyotes. The night sky was clear. The air was fresh. And with the exception of a small tent at the other end of the park, a train, and two off road vehicles, there was no one else there. 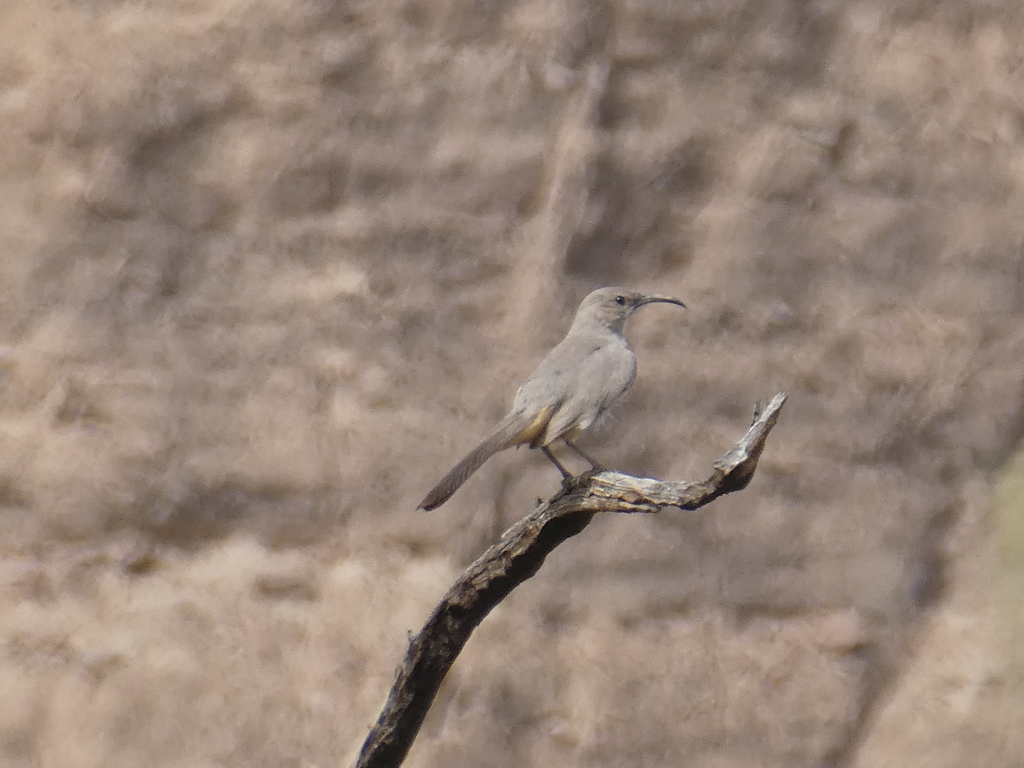 The date farm is situated near the confluence of the Armargosa river and Willow creek. The Shoshone people call this place home for centuries until colonized by Europeans and Asians. The valley was farmed by an Asian Family, until his mysterious disappearance and ownership changed hands many times. The current family is committed to date farming and ecological preservation. Hike trails exists throughout the valley. Amazingly, after leaving the valley and passing the abandoned borax mines, I encountered the the Tecopa falls. This was no trickle of water, but a sizeable flow that continually carved a deep ravine that wound its way disappearing into an ocean of sand and rock.  A word to the wise if you visit.  Partake in the date shake!  I had two and found them amazingly refreshing.  They also sell a variety of date-based products.  (The date muffins were delicious as well.)

Death Valley was, for the most part, as expected. Phenomenal vistas, ever changing color as the sun set, and void of life.

Just west of Paniment Springs is a poorly marked dirt road. It’s rough, but the van made it. About 2 miles of dirt road and 1 mile of hiking through Death Valley head led to the amazing Darwin Falls. My intent was to make it all the way to China Springs, however I didn’t realize that there is no way to get beyond the falls. To get to China Springs, the dirt road must be followed up and around and over the mountain.

I was surprised with the amount of wildlife I saw. From Chuckwallas, snakes, to warblers, and even pelicans, terns, and coots, I was so surprised to find so much life living in such harsh environments.

Perhaps the one that stood out the most, was a fish. At the bottom of death valley (200 feet below sea level), is Salt Creek. It’s a small creek, and due to the drought and climate change is it far less of a creek than it was 10 years ago. Like most creeks in Death Valley, it spawns from a spring out rock, runs a ways, then disappears. In that creek is the salt creek pup fish, and it provides a lesson for us.

The story of this fish is quite amazing. Long ago, Death Valley was more of a sea. Dunes and other evidence of this a all over. However, as the climate shift and the sea dried up, only the Salt Creek Pupfish adapted. Temperatures range in their habitat from 60 to 130F. The salinity of the creek is twice as Saline as the Salton Sea, 4 times as saline as the ocean. (The Dead Sea is 16 times as salty as the ocean). These fish are the last living evidence of the sea that was once there and they have survived and continue to do so. These small fish during my visit to the desert made me think about the larger trends in climate change. In the 1980s, climate change was something that would happen in the future. The 2050 outlook seemed so far off. However, climate change is happening now. Fires, storm intensity, temperature shifts, changes in weather patterns, and extinctions are all happening now. The lesson the pupfish provides is adapt or die. It’s that simple. While many continue the fight about mitigating the effects humans have on the environment, it’s time to start planning on how to adapt….or not.