Some call the Farallon Islands the Galapagos of the North. Lying 28 miles due west of the Golden Gate they break out of the ocean like teeth. At first blush, these jagged bits of granite seem to support little life. However once in earshot and nose shot, life reveals itself. There is a constant cacophony of sea bird and pinnipeds. There is a lighthouse and four families used to live on the island to maintain the lighthouse. In the late 1800s and early 1900s enterprising San Franciscans boated out to the island to collect eggs from the hundreds of the thousands of sea birds that nest there (that’s right hundreds of thousands). Additionally fur trades hunted ocean otters to extinction in these parts and pushed elephant seals and fur seals (which are really a type of sea lion) to the brink of extinction. However it has been declared a national wildlife refuge area and currently only researchers are allowed on the island.

The barren rocks are teeming with wildlife.  Common Murre occupy almost every foot of space above the shoreline.

Aside the from the sheer volume of birds there was also quite a bit of diversity.  Puffins, Pidgeon Guillemots, Oyster catchers, gulls, auklets, cormorants, and phalaropes were in the water and on the rocks.

Some of the stars of the show were the pinnipeds.  There were hundreds of them.   In the main East cove California Sea lions, harbor seals, and Steller sea lions occupied the shoreline territory.  Bulls staked out prominent positions.

Surprisingly the sea lions were great climbers.  Check out the picture below.  Some sea lions climbed up cliff!  (They are circled in red).

On the other side of the islands was an outpost of smaller and more stout, but much more aggressive Norther Fur Seals.  Curious, and long whiskered, they were very active.   In the 1800s they were almost complete exterminated by people attempting to harvest their hides.   With less than 650,000 left in the wild the IUCN red lists lists this species as vulnerable.

One of the real treats were there high concentrations of whales.  We say nearly 15-20 Gray whales.  Some were so close, that when they spouted we could smell their breath. 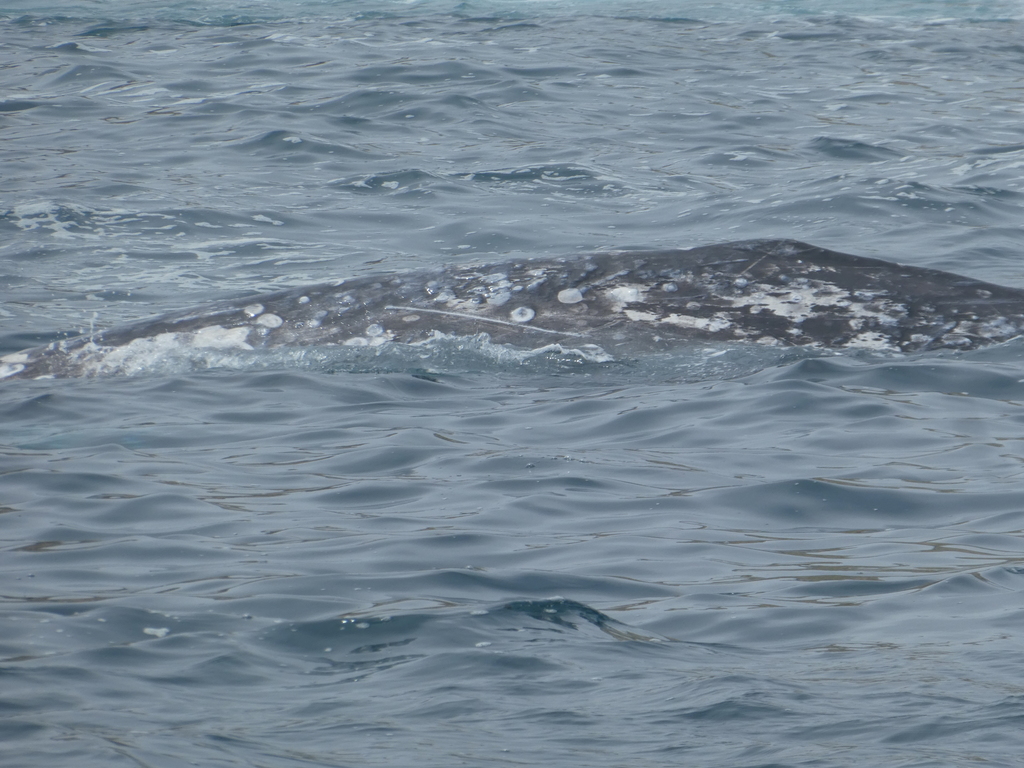 There are a variety of companies that offer tours. We went through the Oceanic Society and were very happy with them. They had three naturalists on board to help identify the different wildlife and the ship, at 59 feet, was quite comfortable. However the 2 hours out is quite a voyage. There was lots of tossing and turning and quite a few people got sea sick. Once out at the islands, the skipper kept the boat mostly in the coves and bays to keep the rocking down. As we passed under the Golden Gate Bridge, I wondered how my dad felt who almost 50 years earlier sailed a small boat out of the bay and up the coast to Tamales Bay. Like then, it was very windy and slightly overcast.

We hugged the coast in a narrow channel outside of the bay until we hit Point Bonita, then turned towards the islands. Along the way we saw a harbor seal pullout beach. Quite a few newborn pups rested on the rocks with their parents.

It was a long 2 hour trip out to the islands with a lot of ups and downs, but it was worth it.