Suaraha was the town that abuts Chitwan National Park.  It was small, welcoming, and a great change from the sprawling Kathmandu city.  There was plenty to do for us outside the park between our in-the-park forays.

Historically the indigenous people to populate this area are lumped together in a group called the Tharu.  During a walking tour of the community we visited the Tharu museum.  It detailed the history of the area and its people.  It also told a familiar story of what happens to indigenous people when dealing with governments.  Living close to nature had its challenges.  However the Tharu proved to be up for most of the challenges.

Although not totally resistant to Malaria, they were more resistant than other populations.  Before the 1960 Anti-malaria campaign in Nepal, the population in the area was 100% Tharu.  Afterwards, when the more non-malaria resistant groups emigrated, the Tharu population dropped to 17%.  In other words the Tharu population was dwarfed by the emigration of other groups.  The landscape changed further for the Tharu after the establishment of the Chitwan National Park.  Many Tharu villages were relocated out of the park.  In many cases, their villages were burned and the relocation were forced.  In the museum we could read the stories of people who recounted their memories of their villages and the relocation.

The museum also showcased Tharu cultural items and efforts being made to preserve cultural practices such as basket weaving.

Many museums are setup by outside forces, this museum however was established, maintained, and run by local Tharu guaranteeing the voices and representations therein remain a first person story.  It was a hidden gem I was glad to visit.

In our walk around Suara we visited many small family farming plots.  They ranged in size from sub-acre plots to 2-3 acre plots.  It was clear that money has started to flow into the community from tourism.  Many modern two story house had been completed or were in the process of being built.  “It’s been the biggest change in my lifetime,” our guide Jai said “Before all of this were single story old style houses.  Now they are taller and newer.”

Even with the new buildings it was still a working farm community and the evidence of this was everywhere.  Livestock, working elephants, acres of vegetables, and chickens.  People worked the fields and gathered wood and supplies from the forest buffer regions.

Our first night in Chitwan we attended the Tharu cultural performance.  Friday nights are the BEST nights to attend.  The large hall was packed with local youth cheering and and hooting for their friends on stage and celebrated along with the performance.  It made the atmosphere absolutely electric.

There were several traditional dances performed by men and women in traditional dress.  Traditional singing, choreographed stick dances, fire dances, it had it all.  Kylie’s favorite was the stick dance and one in which a man came out and twirled in a dress.  I enjoyed the peacock dance.

At the end the crowd was invited up to dance with the members.  Being that 90% of the room was Tharu, they all streamed up on stage to join in.  It was a fabulous evening.

Nature walks on the park boundary

During the day we would walk along the North side of the Rapti river and enjoy the park.  Being an active tiger and rhinoceros zone, a guide was recommended.  However after the first walk, I was pretty confident I could explore the area on our own.  We walked up and down the area several times.  I explored the forest near the elephant stables and the grasslands.  There was always something to see.  We regularly saw rhinos there.  On one evening a rhino came out of the water and walked right through a riverside restaurant. 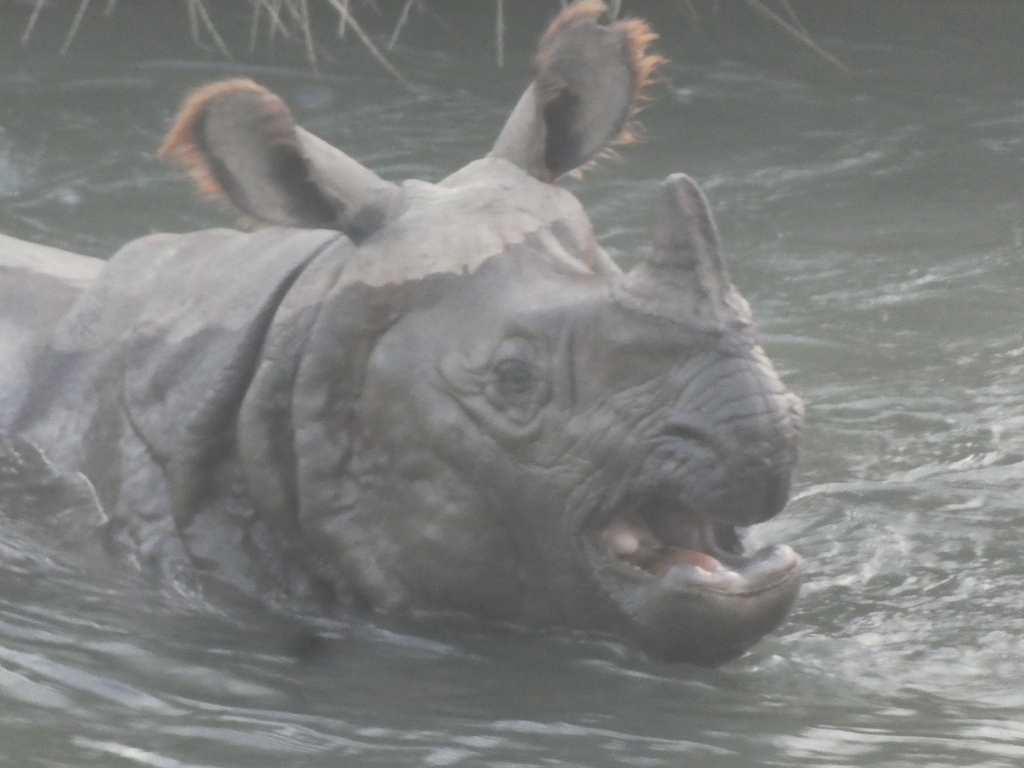 On the last night I heard rhinos fighting and rushed back to see the loser bleeding and resting in the river.  Amusingly, I got to watch it pee in the river.  It peed for about 2-3 minutes unleashing sudsy flow.  One more reason not to drink the water in Nepal.

The Indian Rhinoceros (The Greater One Horned Rhinoceros) has been a success-story work in progress. In 2008 it’s IUCN Red List status changed from Critically Endangered to vulnerable.  It has been because of the hard work and financial commitment from two countries (India and Nepal).

Like many parts of asia elephants were domestic workers.  Nearby the park there were several stables full of elephants as well as a breeding center.  After a day of work, the elephants were chained for the night and fed “Elephant Momos” grass wrapped sugar cane as well as other trees, bark, and grass supplements.

This particular elephant had the largest tusks of the other elephants in the stable.  In the evening, after being chained to a post, it would grab and rattle its chains periodically.  The sound was almost as haunting as the mahouts coming out and yelling at it for making a racket.

We decided not to visit the elephant breeding center; however we did learn that periodically bull wild elephants come in on their own from the park to mate with the domestic elephants.  One the one hand, diversification of DNA helps the preservation of this endangered animal.  On the other hand reproduction with restrained cow elephants felt very wrong.

Asian elephants are more rare than the Greater One Horned Rhino and are listed as endangered on the IUCN red list.  There are some herds with in the park, but our guides told us they were: “Very deep in the park, it is rare to see a wild Asian elephant”.