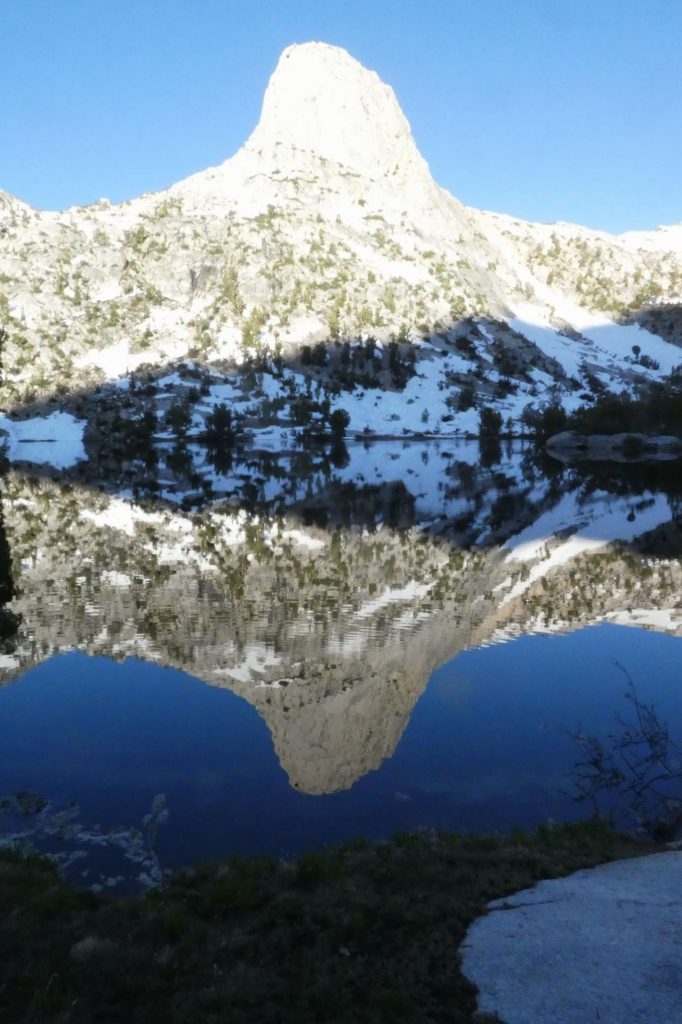 Each night my routine was to record my altitude (according to my data book – Elizabeth Wenk), tally up my distance coverage, and tally up my altitude changes.  I went to bed the night before with a tally of 95 miles complete.  I was to lazy to do the math, but in my mind I knew the end was about 250 miles from where I started.  I was about a third of the way done.  Could I do it?  I didn’t know.

I awoke.  The frogs were still going strong.  I packed up, had a bar for breakfast and headed out.  This area was beautiful (as if other areas were not).  Mornings were special.  They were brisk, the birds were out, and the wind was low so I was frequently treated to views like the one I captured of Fin Dome.  Perfect reflections.

I approached Arrowhead lake as the sun crept into the valley.  The sun illuminated the rainbow trout in the stream.  It looked beautiful, and then I noticed that this was the trail crossing.  I wrestled with the decision on what to do: look for a different crossing point, or cross and start my day out wet, soggy, and cold. Complicating matters, the crossing point looked to be about waist deep, meaning my underwear and shirt would get wet and cold.
I stripped down naked and put my river booties on and crossed.  Sure enough the water was stomach deep.  I got to the other side.  The sun warmed my body and set my pack down on the rock outcropping.  No one was around, I went back in for a dip and scrub.   I went back to the rock and laid in the sun.  In a few minutes I was dry.  I suited up and continued on.

A long down hill was before me.  Down down down.  Terrain was rocky, and occasionally a tributary feeding the South Fork of Woods Creek had to be dealt with.  At Baxter creek, I had just finished putting hiking boots back on, when I ran into Rika.  I had seen her once before at Kearsarge.  “Hi I’m Rika, I hike 20 miles a day.”  I thought to myself: “I’m Dan, and I’m lucky if I hit 10 miles.”; however I kept it cordial.  I remember distinctively when she passed my on a Kearsarge ice traverse.  She just stamp stamp stamped her way forward.  I would cautiously weigh each stepping place, but she was fearless.  I tried to emulate that fearlessness when crossing the Glenn Pass ice fields. Walk like that small Asian lady did.  We exchanged pleasantries and she zoomed on past me.

At Woods creek, the bottom of a very long downhill, I crossed the famed suspension bridge.  It was rickety and the water rushed below.  This was the first bridge I encountered.  How on earth did they get the materials here?

I crossed the bridge and saw a big 800 in the sand. This was one of the many messages left in the dirt for travelling PCT hikers.  They had been hiking for 800 miles, and I was just at 100.  Then, another number jumped into my head 802.  I remember Radagast and Tenison talking about White Fork at 802 as a problematic river crossing.   At two miles up, I hit White fork, a tributary that fed Woods Creek.  The trail was on a steep hill that was rock and chaparral.   There was a campsite by the creek indicating clearly people had camped and tried crossing in the morning when flows were lower.  A misstep here would result in a tumble down a steep hill into the massively swollen Woods Creek.  I walked upstream.  At times there were falls or cliffs that prevented me from staying stream-side.  I picked spot A, B, and C and went back and forth trying to get up the courage to cross.  The water was not deep, but it was fast, much faster than any creek I crossed previously.  I mulled this over for about 30 minutes.  I punted, I went back to the trail crossing, took off my pants, put on my river booties, and crossed slowly and deliberately.  It was easier than I thought and that gave me courage.

Up up up and away.  Again Rika passed me.  She must have stopped for lunch off trail somewhere. We waived and she marched on.  This was a long trudge, and after awhile I was in snow drifts again.  Par for course, I chose the wrong boot tracks AGAIN.  This time I ended up about 300 feet below the trail and cornered by Woods Creek.  I rock scrambled up to the trail and zig zaged up towards Mount Cedric.  My daylight was running out and I really wanted to hit Twin Lakes.  I needed to get closer to the next pass.

After the junction, I was in a marshy area and snow drifts were starting. In looking at the map, it was clear I would have to go down to get to Twin Lakes, and that meant I’d have to go back up later.  I had enough up-down for one day (2400 down and 2200 feet up) The sun was almost down.  I pitched a tent and decided to hit the trail early in the morning.  In looking at the map I was almost exactly where I had planned to spend night eight. I was now on night ten.  Two days behind. 105 miles in and in my journal I wrote: “I spend most of the day missing my family and thinking about homecoming. &#@!! and I’m not even half way there yet.”