Kathmandu lies in a bowl surrounded by mountain ranges in Nepal.  Artifacts place human activity in this fertile valley as early as 1BC, with the likelihood that humans were settled there much earlier.  Written accounts of Nepalese civilization and stories place civilization in valley as early as 500BC with the Kirat_Dynasty (Source).  As civilization developed in the valley, dynastic rule continued throughout Nepal’s history.  It was one of few countries never conquered nor colonized.  They pushed back the British, Chinese, and the Indians.

The air quality in Kathmandu when we landed was 300 (Click here).  In other words, about as bad as Delhi.  We decided to shorten our stay in Kathmandu.

In Kathmandu we stayed in Thamal.  Like several other “old town” cities we’ve been to it was ready made for tourism.  All food types, services, and conveniences were readily available.  It also provided an interesting confluence of new and old.

Kathmandu is a sprawling city complex of 4 million people over 600 square kilometers.  Once upon a time it used to be three separate communities that have since merged into one giant mega city.  This is why there are three Durbar squares and different styles in the three major districts.  Artifacts and shrines are in every nook and cranny in the city.  People build around them.

A UNESCO World Heritage Site, Kathmandu boasts several significant monuments.  Many were damaged in the 2015 earthquake.  Buildings were either brick and motor, stone and motor, or modern sky scraper construction with no buildings really exeeding 10 stories.  We were rained out from visiting Bouddanath, but we did manage to visit Swayambu and Bhaktpur.

We tried to walk there and ended up jumping on a local bus, which dropped us of right in the rear of the park.

Atop a hillock overlooking Thamal, Swayambu boasts monkeys, giant golden statues, and the oldest stupa in the valley.  Stories from other travelers to Nepal describe visiting it in the third century BC, and inscriptions at the site say it was built by the great grandfather of King Mānadeva  who was born in 464AD.

We were impressed with its age majesty.  We watched the monkeys carefully as they tried to sneak up on us and other people.  Others fed them openly.  Some monkeys camped out at the alters where people put food.  Sometimes people just gave it to the monkeys directly.

Swayambu was an active pilgrimage site.  People have flocked to this temple through the ages.  A prominent feature at this temple were prayer wheels.  Walking clockwise around the shrine, temple, or entire hill you spin the prayer wheels.  While some people spin them for the novelty of spinning, there were quite a few pilgrims being assisted by monks who were actively spinning, praying, and worshiping at each shrine. 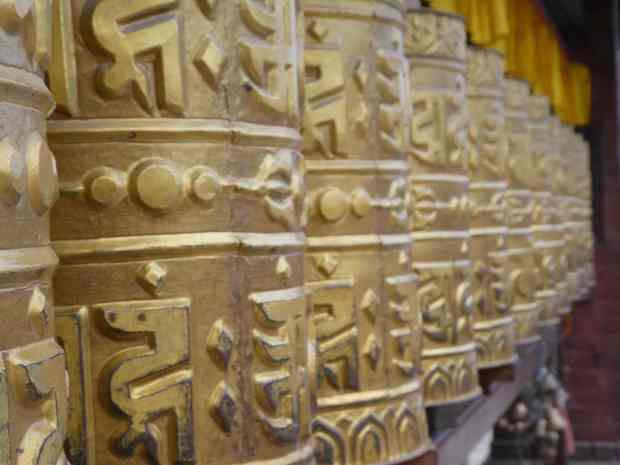