For my birthday, my parents organized a whale shark  watching trip. My dad and I arrived at Island Diver, the organization that took us. While we waited for everyone else to arrive and tour to start, we selected fins that fit our family. The fins were important because we would be swimming in open ocean, where the current is much stronger and the swells are larger.

Kylie and our mom arrived just on time to pick fins and get on the boat. We had to boat 45 minutes to the fist spot off the coast of Mama Gilly Island. A German couple, a Swedish family, and two other men were aboard too. Kylie got a bit nauseous on the way there but still hopped in.

The reef was dramatically different from the others we had been swimming at since the Thai islands. Those had been shallow, some so shallow we were scraping our knees on the sharp coral. This reef, however, was extremely deep. This made it hard to get good photos or see the wildlife. Regardless, Dad dove down several times and got several excellent photos.

I though it looked like the reefs in Hawaii, but I also though it looked kind of dead. While there was still wildlife, there was also broken and bleached coral everywhere. The hue of the water made the scene very green, but the bright colors of the fish were stark against the background.

We had hoped to see a whale shark meandering along this reef, but sadly ,there were none. Although they did see a ray (whatever the name is), unicorn fish, insert other fish names etc. The scuba divers report seeing several reef sharks, rays, and moray eels.

A little disappointed, we got back on the boat after half an hour of searching. But the boat crew kept searching.

All the boaters have a large WhatsApp system where they communicate if anyone has seen a shark. Soon enough, a crew member got a text and his face immediately lit up. He rushed to the captain to inform him of our next location. Almost simultaneously, seven nearby boats made sharp turns an headed in the same direction they were. Everybody started getting their masks and flippers on with excited energy.

Even though the presentation the night before told us a bit what to expect, it was much more crowded and chaotic. There was at least 70 people in the water, all trying to get close to it or get a great shot. The whale was a juvenile, so not as large as I expected. But still around six to seven meters. I kept getting kicking by people in front of me.  The whole encounter lasted about 22 minutes, but we only arrived for the last six minutes. It was absolutely magical, even while getting kicked in the face by others, getting so close to such an amazing creature was so special. When I first got into the water, I couldn’t stop smiling, water kept getting into my mask. Dad got some great pictures when he dived down and got up close. He said it was special because there was no one around him, just the water and the whale. He left behind the chaos o the surface and descended into the relaxing deep blue. 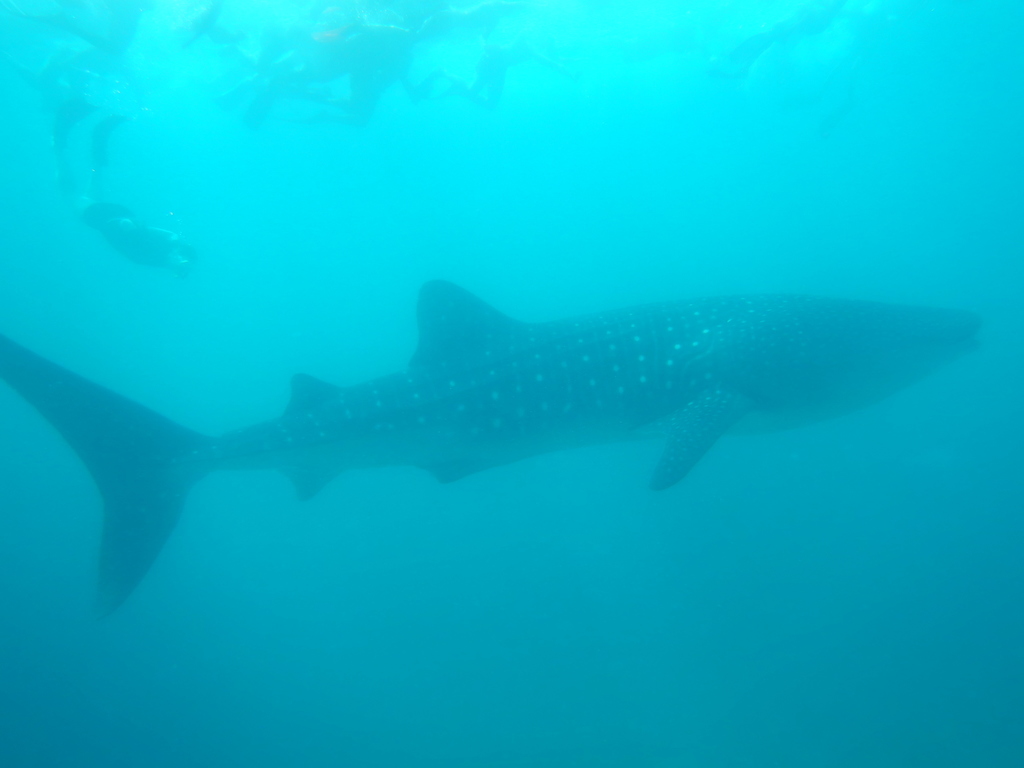 After the whale shark left, everyone was out of the water in a matter of minutes. Where there were boats and brightly colored snorkel tubes, swim wear, and fins, there was only the water and the waves. Unfortunately, we headed back after just one encounter. I expected to see more because Chloe had said that there were 6 sightings the day before. But we headed back anyways. I was asleep most of the ride, but from what I could tell, the swells were much larger, some three feet tall. I kept getting splashed by the spray on the way back and kept sliding up and down the boat from my position on the lacquered bench.

Getting up close to such a majestic animal is an experiences not many have the opportunity to do. It is even more special because whale sharks are endangered and may very well be extinct in a few decades due to commercial fishing, hunting, or boat injuries. It is definitely a memorable experience that will stay with me for the rest of my life.

The evening before our whale shark dive we had the opportunity to meet with Chloe and Ish from the Maldives Whale Shark Research Program. They showed us a beautiful slide presentation at a local cafe on everything you need to know about whale sharks; size, life span, habitat, feeding style, dangers, etc. Surprisingly, there was much that was still unknown like how, where, and when they breed and how deep they dive to search for food.  The presentation was excellently crafted with the right amount of facts, images, and spoken details that balanced each other and made learning about the whale sharks fun and interesting. Their dedication to their work was extremely impressive and inspired me to find a career that I am just as passionate about.

Kylie: Did you know that whale sharks skin is actually micro scales that help them swim? Whale sharks known as tofu shark they are sold on the black market for 20,000 DOLLARS.  Chloe and Ish are very nice and I loved sharing the chocolate ice cream with them!  The meeting inspired me to work with animals and how much humans and climate change is affecting them.

We logged our encounter with the Wildbook For Whalesharks.  Whale sharks, like leopards and tigers have unique spot pattern.  Whales can be recognized by those patterns.   Whale Sharks are listed as endangered on IUCN’s Red List.   Their numbers are decreasing and efforts to track and learn more about this species are critical for their survival!  (When we hear back from the scientists about our encounter, we’ll update this post)