Located in the Kenai Fjords National Park of Alaska, the Exit Glacier opened our eyes to climate change.  Before visiting, climate change was something we knew was happening, but like frogs in slowly boiling water, we could not tangibly feel its effects in ways that we recognized.   We could interpret the graphs, look at the data, and intellectually understand the impacts of global warming.  However, this lonely and disappearing glacier was tangible evidence of the change happening to our planet. 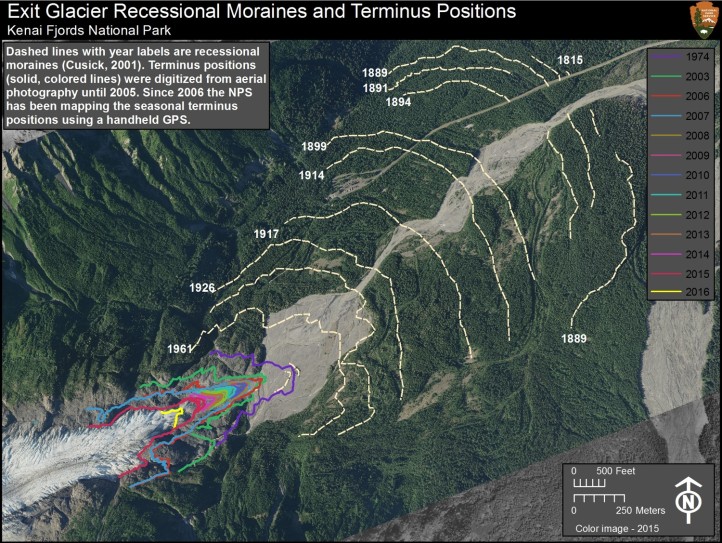 Driving up to the glacier’s visitor center we passed by numerous markers with dates upon them.  It wasn’t until we were in the visitor center that each marker indicated where the glacier was during that year. Put another way, in 1815 nearly 200 years before we visited it the glacier was roughly 4 miles farther than it’s present position.  Hold on to that thought for a moment.

The markers for 1815 – 1894 were much closer together, with the markers for the 1900s being farther apart.  Why? The industrial revolution had taken off and the Earth’s warming trend had begun in earnest.  Measuring the retreat is not a simple matter as humans really didn’t start keeping track of the glacier positions until the late 1900s.  Thanks to the phenomenal research by Deborah Kurz and Emily Baker of the National Park Service (Click Here),  people can start to understand how retreats are measured and tracked.

With Kylie and Alyssa, we hiked up the Exit Glacier Trail through brush and trees that were under a glacier just 50 years ago.  We saw the various terminal moraines and how foliage regained territory.    Approaching the glacier the foliage gives way to a more barren landscape and the glacier revealed itself.

With references it is hard to explain how massive these glaciers are.  So zooming in:

If you look closely on the first picture you can see the people on the mid-upper right of the picture.   Now back to the earlier thought.  Four miles of this massive piece of ice has retreated.  That is a lot of ice.  That is a lot of water.   Even more stunning, the retreat is accelerating.  The Exit Glacier has been retreating on average 46 feet per year since 1815. However since 2009, that average increased to 153 feet per year, with 2016 being the largest retreat in recorded history at 293 feet.

Like Obama in 2015 who visited the Glacier (click here), Alyssa was struck by the fact that she could actually see something that was disappearing.   As the keynote speaker at the YES conference, she referenced the impact it had on her. (Her YES conference 2018 Speech,and later on her Global Climate Change address).

Part of the problem of climate change is that the Earth is so massive and big and grand, and we are so small and insignificant by comparison.  Moreover, our attention is far more fleeting than that of geologic time.  We can see the changes from season to season, and maybe notice that a spot we visited as a child is different.  Climate change is affecting everything, little by little.   Perhaps the frog in the boiling water is not the proper analogy. Perhaps it is more like a single bacteria in a large human host.  Thriving and oblivious to the fact that the host is dying.   Will some global penicillin wipe us out, or will the host die leaving us to wonder what the heck happened…we were thriving right?